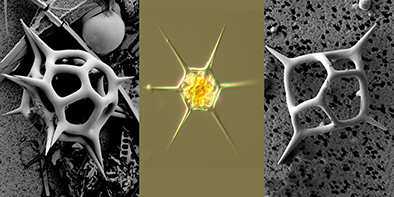 Silicoflagellates (Class Dictyochophyceae) are yellow unicellular protists. They have several stages of life history with the most common form being the skeleton-bearing cell. The characteristsic siliceous skeleton consists of a polygonal basal ring with protruding radial spines. Silicoflagellates are generally regarded as having low overall abundance in the Southern Ocean and the concepts of species and genus are still being dicussed.

There are 3 species in this key which can be identified solely by light microscopy (LM) but we have included scanning electon micrographs to reveal cryptic features. A thumbnail image of each species is included as a “first impression” and generally this can lead directly to a successful identification. Further images can be viewed on the factsheets. Images are sourced from Antarctic Marine Protists (eds. Scott & Marchant, 2005) unless otherwise credited. A glossary to explain specific terms has been integrated into both key and factsheets.

Taxonomic names are those used in ‘AlgaeBase’ (accessed April 2013). The following references and weblinks may be useful to the user: