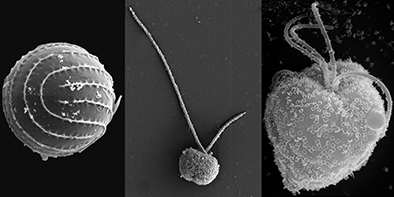 Prasinophytes (Class Prasinophyceae) are small, solitary or colonial cells with layers of organic scales covering the body and flagella.  Flagellate forms possess 2 or 4 (exceptionally 6 or 8) anteriorly inserted flagella. Typically, each cell has a single cup-shaped or lobed chloroplast that is green, yellow, gold or olive, with 1 or more large pyrenoids. The scales are formed within the Golgi apparatus, later being released to the surface of the cell. They are distinguishable by SEM or TEM and are finely and distinctively patterned, this patterning being useful for the recognition of species. The non-motile vegetative stage of prasinophyte flagellates, the phycoma stage, is often reported.

Prasinophytes are commonly a minor component of the Antarctic phytoplankton with high spatial and temporal variability in Antarctic waters. Buck & Garrison (1983) recorded c. 0–3 × 104 cells per litre, while Davidson & Marchant (1992a) reported 1.6 × 105 cells per litre. Bird & Karl (1991) documented a massive bloom of a Pyramimonas species in the northern Gerlache Strait with concentrations of chlorophyll a reaching 25 µg per litre and cell numbers exceeding 7 × 105 per litre.

There are 7 species in our key and some can be identified solely by light microscopy (LM) but others may require the use of a scanning electron microscope (SEM) to resolve cryptic features. A thumbnail image of each species is included as a “first impression” and in some cases this can lead directly to a successful identification. Further images can be viewed on the factsheets.

Taxonomic names are those used in ‘AlgaeBase’ (accessed April 2013). The following references and weblinks may be useful to the user: