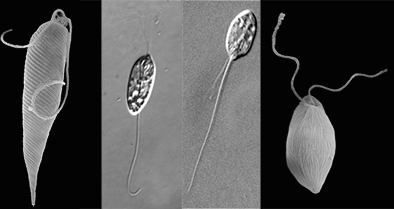 Euglenoids (Class Euglenophyceae) are solitary, with two heterodynamic flagella arising from an anterior canal (sometimes only one emerges). They have pronounced metaboly (mobility and the ability to change shape), they possess pellicular striations or bands (often helical) that are usually visible by LM, and they have an orange-red eyespot outside the chloroplast at the base of the canal. Species identification relies heavily on morphology and the availability of living material, with ultrastructural observations verifying certain attributes.

There are few reports of euglenoids from Antarctica. Three unidentified species were recorded from sea-ice near Davis Station, East Antarctica (Archer et al., 1996b) and two (including Petalomonas sp.) were found in pack-ice assemblages in the Weddell Sea (Garrison & Buck, 1989b).

There are 4 species in our key and these my be identified solely by light microscopy (LM), however the use of a scanning electron microscope (SEM) may resolve cryptic features.  A thumbnail image of each species is included as a “first impression” and in some cases this can lead directly to a successful identification. Further images can be viewed on the factsheets.